One of my favourite cookbooks is by Simon Hopkinson, called the “Roast Chicken And Other Stories”. The book goes by chapters of different food items – asparagus, cream, eggs, spinach, and, of course, chicken. Each chapter contains a short story of his first memory of the ingredient and he gives out simple recipes that make the main ingredient stand out. Published in 1996, it’s a classic that I strongly recommend for your cookbook shelf, if you have one.

I roast chicken about once every 2 months. For roast chicken, you go for the best one – make sure it had a happy life. It’s expensive, but it is worth it and I truly rather prefer to eat plant-based food than to eat a chicken that costs under 3 euros per kg. What kind of practices and industries would you be supporting buying chicken at such price?

And the money well spent will reflect in taste. Just look:

And don’t forget all those beautiful juices at the bottom of the pot. A concentrated liquid chicken. Additional flavour comes from stuffing the bird with thyme & half a lemon. That is it. My chicken weighed close to 2 kg (brought to room-temp) and I roasted it for 1 hour 40 minutes at 180 half-covered in my cast iron pot. I bronzed it at the end with a blast of heat.

That was not it though. As it is first of May I wanted to make dinner more special and I had in my fridge 1 kg of prime white asparagus bought from a neighbour  (jackpot!). 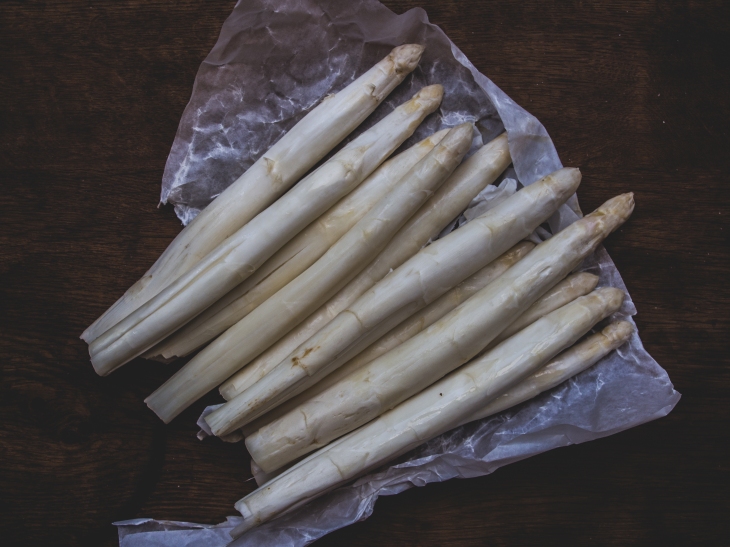 These were harvested about 48 hours ago, during the evening, when there is no sunlight anymore to produce chlorophyll. You do that if you take pride in your asparagus. Sloppy growers can sometimes let some light in that causes tips to go darker. However, that is how green asparagus is grown – with no covers to block the light.

The asparagus on my previous post was just bought in a shop – they are still very good, but they tend to be not as white and what is even more irritating is that you really don’t know when they were harvested. I have seen some very dried out stems that made me very disappointed. These released quite some liquid (doesn’t happen that much with store-bought asparagus) after being slow-roasted in the oven, and had a milder earthier flavour. Very tender.

I love asparagus with Hollandaise sauce. I also love chicken and tarragon together. And One doesn’t have to think too long – Béarnaise it was. 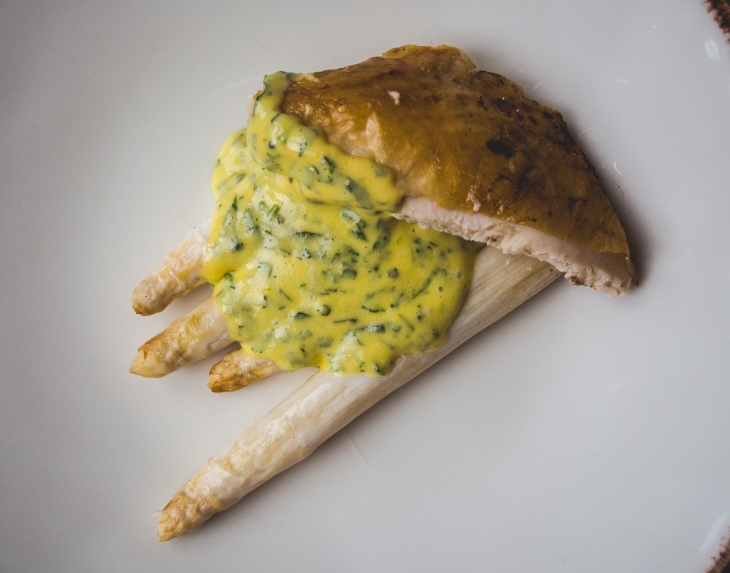 Here is a piece of breast with crispy skin for fussy eaters. Tender and good, sure. But a roast chicken entails much more than breast meat. My favourite:

Chicken oysters. And these are especially the parts where you can taste the difference between a happy bird and the other ones. The French call these pieces as sot-l’y-laisse, which basically means that you’re an idiot if you don’t eat them as first. I kind of agree. 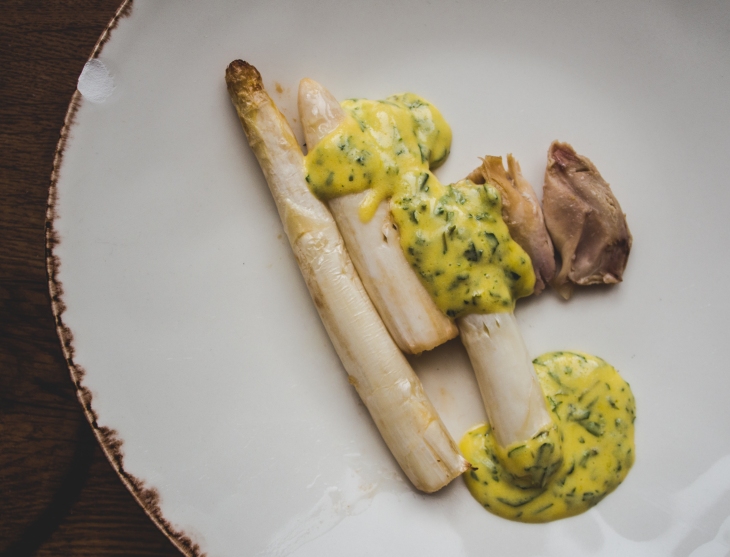 Chicken oysters, asparagus, Béarnaise – never did such combination, for sure will do again. Chicken and Béarnaise, I tell you.

And don’t forget to add all that beautiful concentrated jus too.

I say, roast chicken and no other stories.